If you were looking for transcript page, then check this page.

"The moment they didn't noticed for 30 years has finally came."
―The movie's tagline

Lisa and Bart's uncle, James Bouvier, was always wondering why no one in Springfield ever age. He worked hard to find out about the problem, and broke the space-time continuum thanks to his Aginator. The Simpsons' family mission is to fix the timeline and save the whole universe. 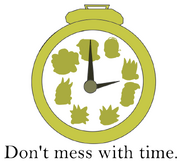 Poster 1
Add a photo to this gallery
Retrieved from "https://simpsonsfanon.fandom.com/wiki/The_Simpsons:_Time_Catastrophe?oldid=38295"
Community content is available under CC-BY-SA unless otherwise noted.