Seymour Skinner is the son of Agnes Skinner and the principal of Springfield Elementary.

Seymour Skinner is an middle aged man with a yellow skin tone (like many residents of Springfield). His hair is taupe grey in color and is neatly combed, aside from a persistent cowlick. Skinner has black pupils and no apparent irises. He has a noticeable overbite and a somewhat big nose. Finally, he is of average height and weight, though the exact measurements are unspecified.

Seymour is typically seen wearing a blue two piece suit with a purple shirt, a red tie, and grey dress shoes. Occasionally outside of school, Skinner will wear a green sweater, black pants and sneakers.

Skinner is a out-of-touch underdog and a stickler for the rules. He can be described as a kiss-up, as he occasionally tries to earn his boss's respect. Skinner is the polar opposite to Bart Simpson. Despite this, the two of them once became friends outside of school. However, Seymour wasn't always the way he was; in his youth, he was actually somewhat rebellious. It wasn't until he joined the army that he started to become the man he is today. Skinner has once said that he "lacks confidence", which would explain why he never has the courage to stand up against his controlling mother or move out.

Seymour Skinner was born to Agnes Skinner in the year of 1953. He never knew his father; Skinner's dad, Sheldon, had left when he was very young, and all he knew about him was that he had served in World War II and divorced Agnes early into their marriage. Agnes would constantly smother her son, which led to Seymour attempting to rebel against his mother as he grew older. He became something of a criminal, stealing from other people. One day, however, Seymour was caught by the police, and they gave him two choices; serve in the army, or get thrown in jail. Seymour obviously chose the former of the two choices. So in 1970, at the age of eighteen, Seymour joined the army and served as a soldier in the Vietnam War; he was stationed in Da Nang.

The Vietnam War left young Seymour traumatized, and he lost many war buddies, including Johnny. After several years of service, Seymour was officially discharged from the US Army. He was left emotionally scarred from his experiences, and was a drastically different person than he was before. Fortunately, Seymour mostly recovered overtime. After his time in the military, Seymour wished to pursue a career in education; he convinced his mother to help him pay for college. After graduating, Seymour taught a fourth grade science class. Five years later, he became the principal of Springfield Elementary.

Agnes is very controlling of her son's life, so much so that Skinner has accidentally referred to her as "my beloved smother" instead of mother.

Skinner's relationship with his boss often fluctuates. Sometimes, they get along reasonably well. Other times, not so much.

Skinner as a child 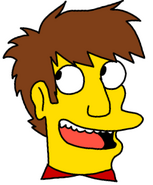 Skinner as a child (no hat) 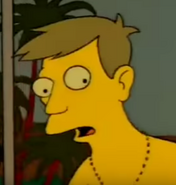