"If anyone wants me I'll be in my room."
―Lisa's "catchphrase"
"I'm already in a dress and pearls, and I'm eight years old."
―Lisa, to Marge
"A great musician only needs her instrument. And underwear... 'cause this dress is mighty short."
―Lisa Simpson

Elisabeth Marie "Lisa" Simpson is the middle child of Homer and Marge Simpson, the younger sister of Bart Simpson, and the older sister of Maggie Simpson.

Bright, intelligent, and quite distinguishable from her family and her peers at school, Lisa is more concerned about the world's problems and constantly makes attempts to find solutions to them. As a result, she is a vegetarian, a Buddhist, and usually part of the activist crowd; her rebellious attitude ironically makes her the same as her older brother Bart, whom she detests frequently. Lisa's goal to change the world one step at a time has earned her the wrath of many authority figures and also rendering her without any true friends. Another goal of hers is to get straight A's, a goal that tests her high integrity many times. This personality of hers has torn her apart from her family numerous times.

She's very self-conscious about her butt, thinking it's big and sticks out.

Lisa has blonde, star-shaped hair. She has blue eyes. She usually wears a strapless red dress with a zigzag hem that reaches mid-thighs (making her dress "mighty short"), matching Mary-Janes, frilly white panties, and a white pearl necklace around her neck (given to her by Marge).

Though sometimes wears different outfits. She has had two different outfits for church and family outings: first a magenta long-sleeved dress with a ruffled collar and magenta pumps, then a baby pink short-sleeved tutu dress with a darker pink belt, a wide brimmed hat with the same colour scheme, and strapped pumps much like her usual ones. At night, she sleeps in a turquoise nightgown with a frilly white collar and matching cuffs, as well as turquoise slippers. When Marge insisted on sending her to ballet, she wore a leotard and tutu in the same shade as her new church outfit, and pink ballet shoes. At her tap dancing lessons, she dressed in a magenta vest, pale pink tights, a violet tutu and black tap shoes. When she swims, she wears a magenta or red swimsuit.

As mentioned above, her butt is very overweight.

Lisa is more close to her mom, due to her being concern for her self-esteem. Though she finds her mom annoying sometimes. Lisa fears that she'll grow to be like her, an unfulfilled housewife/homemaker with a raspy voice.

Lisa is constantly annoyed by her brother's pranks and immature misbehavior. Both the brother and sister fight on certain occasions and they both agree to disagree. She is constantly tormented by Bart who enjoys getting on his sister's nerves.

Lisa takes a liking into her. She sees Maureen as an "aunty figure", more favorable than her own aunts Patty and Selma. She sometimes hangs out at Maureen's beauty parlor.

Lisa's best friends with Alex Whitney, who's the most fashionable girl in school. Lisa's happy to have a friend, though she questions her lifestyle, and envious of her easy-going personality. She appreciates Alex helping her be more open, be a little more fashionable, and to put on make-up once in a while.

Lisa looks up to her, working to pay for college, in spite of working in a place where she's exploited. She took to heart Candy's advice of not being afraid to be both pretty and smart. She also excepts Candy's sexuality (she's a lesbian), but is weirded out by Candy admitting she's attracted to Lisa's mom.

Lisa enjoyed the thrills of cheerleading, thanks to them. Though she hates how much they're exploited, without even getting their fair pay.

Lisa concern about her mom being drunk and chummy with her.

Candy peaks out to see Lisa.

Lisa visits Candy at her workplace.

Lisa's nightmare about disappointing her mom. 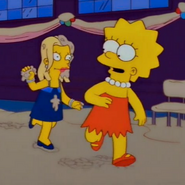 Lisa having fun with Alex.

Lisa and Marge shocked, as a group of hookers are charging at them to "put a cap in their asses". 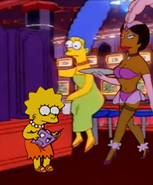 Lisa was dragged along to Marge's gambling for good luck.

Lisa joins Marge and Selma for a night on the town